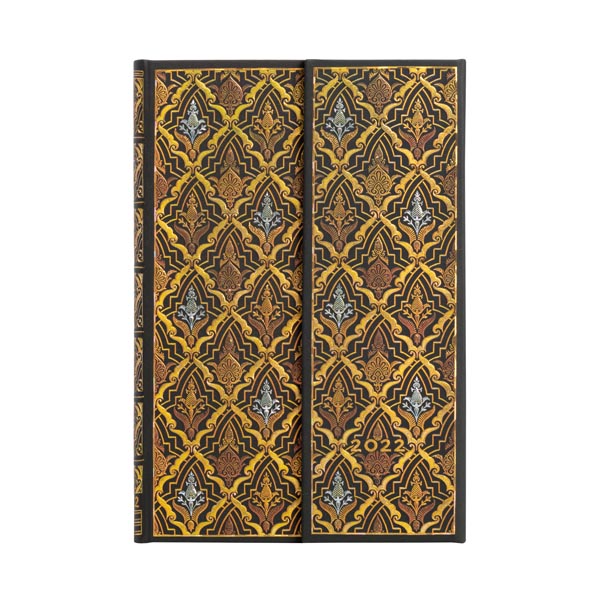 
This design comes from an 1893 binding housing Voltaire’s Zadig, or The Book of Fate. First published in 1747, it tells the story of Zadig, an ancient Babylonian philosopher. The book is a philosophical treatise that provides thematic inspiration for the modern detective story, including for Edgar Allan Poe’s C. Auguste Dupin.Francois-Marie Arouet (1694–1778), known as Voltaire, was a writer, philosopher, poet, dramatist, historian and polemicist of the Enlightenment era. The diversity of his literary offerings is surpassed only by its abundance: nearly 20,000 letters and more than 2,000 books and some 15 million words.Born in Paris, Voltaire was the son of a well-established lawyer who wanted his son to follow in his own footsteps. The young Arouet changed his name to Voltaire and swiftly began making a name for himself as a writer.Not just a prolific writer and poet, Voltaire is renowned for his views and ideas on rational religion and liberty. He was a man of reason and had a hatred for superstition. He endeavoured to champion his philosophies through his writings, and he crossed borders and cultures to spread his message.This beautiful binding originally housed Voltaire’s Zadig, or The Book of Fate, his most popular work after Candide. The book was published in 1747 and this binding was crafted in 1893 by Chamerot et Renouard in Paris. The Book of Fate tells the story of an ancient Babylonian philosopher named Zadig. It is an example of how Voltaire used a story to comment on the issues of his time.