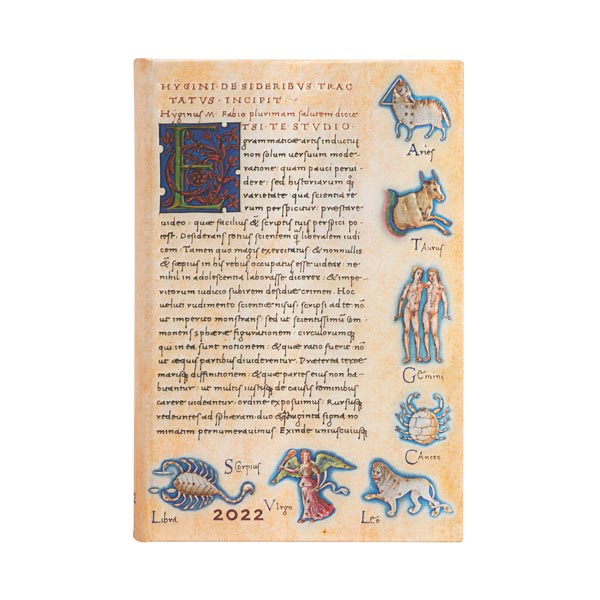 
Discover the legends of the constellations! This design highlights the craftsmanship involved in creating illuminated books such as De sideribus tractatus, a 15th-century manuscript copy of De astronomia. Though the 1st-century BC original is long lost, it has been kept alive by the scribes and miniaturists who reproduced it.Discover the ancient Roman legends of the constellations with this intriguing journal cover. Reproducing images from De sideribus tractatus, a 15th-century manuscript copy of a treatise on astronomy known as De astronomia, this fascinating design is now a part of The New York Public Library’s Spencer Collection.The original De astronomia is most commonly believed to have been composed late in the 1st century B.C. by C. Julius Hyginus, a freedman of Augustus Caesar and chief librarian of the then recently established Palatine Library in Rome. The original is long lost. Over the centuries, manuscript copies of the treatise were created in order to preserve Hyginus’ words and reflections. The work was transmitted by scribes who painstakingly reproduced the original text, word by word and copy by copy, and artists called miniaturists who supplied the appropriate illustrations in each. Today, only 88 manuscript copies survive, the earliest dating to the 9th century.De sideribus tractatus itself is dated to circa 1475–1480 and named for the recognizable words written in capital letters at the beginning of the text: “Hygini de sideribus tractatus incipit,” meaning “Here begins the treatise of Hyginus on the constellations.” Over the years, the work has also been referred to as “Poeticon Astronomicon” (used in the first illustrated printed edition) or “De imaginibus coeli,” as well as “Poetica astronomica,” from which we have taken our journal title: Astronomica.The text of this manuscript copy is believed to have been inscribed for his own use by Francesco Buzzacarini (ca. 1440–ca. 1500), with artwork attributed to Giovanni Vendramin and an otherwise anonymous miniaturist known as the Douce Master. Their artwork is, in fact, what makes De sideribus tractatus such an exceptional copy of De astronomia. The quality of detail and additional artistic flourishes in this manuscript cause it to outshine nearly every other known manuscript copy of Hyginus’ work.The illuminated manuscript known as De sideribus tractatus is featured in the new Treasures of The New York Public Library exhibit. We are honoured to partner with the Library to bring this fascinating document to our Paperblanks collection.