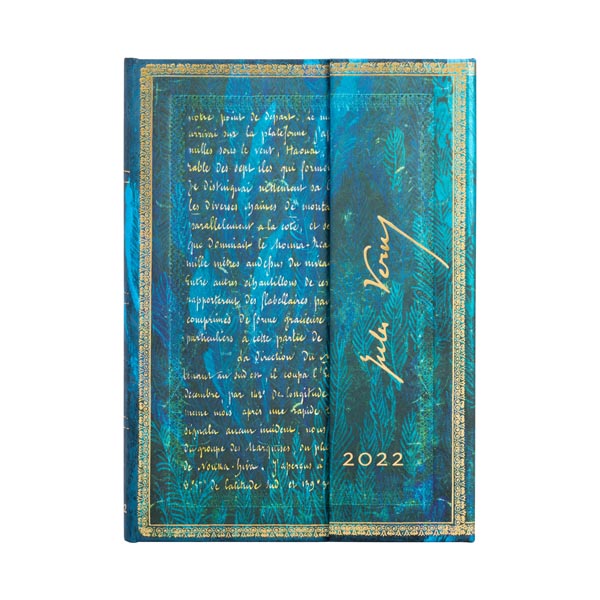 
Jules Verne (1828–1905) is the author of some of the world’s most famous books. This Embellished Manuscript in oceanic blue features a page from Verne’s handwritten draft of Twenty Thousand Leagues Under the Sea. The back cover shows an engraving depicting Captain Nemo observing “a squid of colossal dimensions.”French novelist, poet and playwright Jules Gabriel Verne (1828–1905) is the author of some of the world’s most famous adventure stories. Through his collaboration with publisher Pierre-Jules Hetzel, Verne created the Voyages extraordinaires – a popular series of novels which included Twenty Thousand Leagues Under the Sea and Around the World in Eighty Days.Today, these two works stand as pillars of the science fiction genre. In fact, when developing our Jules Verne Embellished Manuscript we simply could not choose between the two – which is why we offer two unique Jules Verne titles!Jules Verne, who wrote his stories in his native French, has the distinction of being the second most translated author in history, right between William Shakespeare and Agatha Christie. It is perhaps due to the immense popularity and variety of translated interpretations that his work has sometimes been dismissed outside of Europe as “genre fiction” or children’s literature, interesting but light stories not worthy of serious discussion.In the years since his death at the beginning of the 20th century, scholarly attitudes towards Verne’s work began to shift. This is in large part thanks to the Societe Jules Verne, an academic organization dedicated to studying his work. Also, many of his early admirers (including George Sand and Theophile Gautier) went on to have their own celebrated careers, bringing a greater sense of respectability to his work.Verne is now remembered as one of the “Fathers of Science Fiction,” standing alongside H.G. Wells and Hugo Gernsback. He is credited with being an inspiration for the steampunk genre, a movement championing science fiction based on 19th-century technology. Interestingly, Verne himself never aimed to be a scientific writer. Instead he sought to share the beauty of the real world, saying his goal was to “depict the earth [and] at the same time to realize a very high ideal of beauty of style.”Our oceanic blue Verne, Twenty Thousand Leagues design features Verne’s handwritten draft of Twenty Thousand Leagues Under the Sea. The back of the journal features an engraving depicting Captain Nemo observing “a squid of colossal dimensions.”Published in 1870 with the full title Twenty Thousand Leagues Under the Seas: A Tour of the Underwater World, the book’s popularity and acclaim has never waned since its first release. Captain Nemo’s ship is considered especially memorable for being so ahead of its time in terms of its description of a submarine, which at the time was a very primitive vehicle. We hope the words of one of the most popular authors in history will inspire you to take your own writing to new depths. Because, as Ray Bradbury said, "We are all, in one way or another, the children of Jules Verne.”