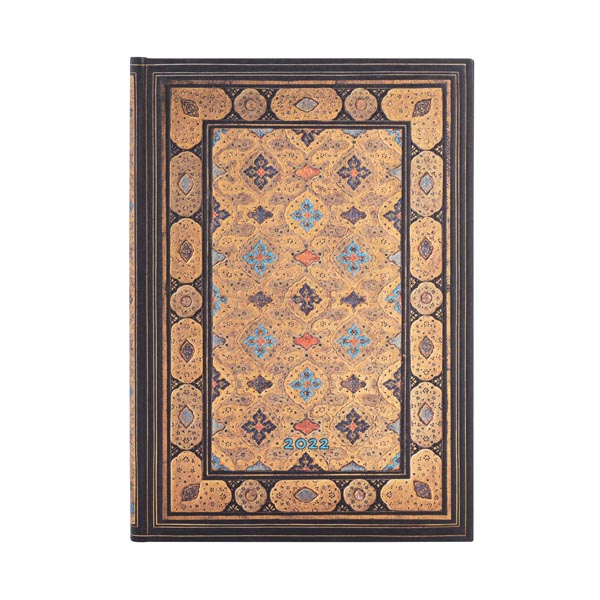 
The artistic mecca of Shiraz, Iran is the place of origin for this design. Created during the high point of Persia’s Safavid Dynasty, the book that inspired this bookmark is said to have been in the possession of Suleiman the Magnificent, the Ottoman Empire’s longest-reigning Sultan.Our Shiraz series has been inspired by an exquisite piece of Eastern bookbinding. Originally crafted from rich black goatskin that was embossed, gilded, handpainted with flowers and rosettes, and overlaid with delicate gold filigree, this design is said to have been commissioned by one of the art-minded Safavid princes of Shiraz and was, at one time, the property of Suleiman the Magnificent.During the 16th century, Shiraz was one of the three Islamic centres actively celebrated for artistry. A part of modern-day Iran, Shiraz is still known as a city of poetry, literature, wine and flowers – a city flourishing both in its abundant gardens and within the arts. The craftspeople of the region were especially known for producing gorgeously decorated texts which were often used in commerce with the Ottoman Empire. It was likely through these channels that the book adorned with this binding ended up in the collection of Suleiman, the tenth and longest-reigning Ottoman Sultan.It should be no surprise that such an expressive and grand work of art was owned by Suleiman. He was a gifted poet and goldsmith himself and became a great patron of the arts. In fact, it was under his patronage that the Ottoman Empire entered its golden age of cultural development, alongside the emerging brilliance of the Safavids in Shiraz.